Bill Prescott, CFO of the Jacksonville Jaguars , called me in to see if I could complete some FRx reports that his Accounting Manager was working on. She was trying to create NFL-conforming schedule templates in FRx. I started by spending a few hours reviewing what she had already done, and then I compared her templates to the schedules and a working trial balance they had pulled into Excel and coded with the NFL-schedule and -line code.

As I looked at FRx, I was seeing hours of having to manually reconcile the trial balance to the coding. This would require exporting the details and then mapping them to a coded spreadsheet. This didn’t seem like a productive use of anyone’s time. Not to mention, every year they added around a hundred accounts and poor Brian, their staff accountant, would have to repeat the whole process for every one of them. Plus, in some reports I could see the Accounting Manager was struggling with trees and the way segments were pulled together, which equaled even more hours of trying to jam a square peg into a round hole.

Eager to simplify the process (and end the drudgery), I thought, There has to be an easier way—90% of the coding has already been done in the spreadsheet!

It appeared that each year the Accounting Manager would take the working trial balance and export it out to Excel, then probably do a VLOOKUP to map the codes from the previous year’s spreadsheet and manually add the codes for the new accounts. The spreadsheet would be subtotaled by schedule and code, and then manually inserted into the NFL template and tweeked and tuned until all the numbers accurately reflected the audited P&L and Balance Sheet.

So I thought if I could get the codes from the General Ledger (GL), I could recreate the reports altogether. Each GL account has four user-defined fields. I figured I could use these fields to enter the NFL template codes, populating “User-Defined 1” with the NFL schedule and “User-Defined 2” with the line code. Using integration manager, I ran a GL update integration which would, at the very least, allow me to generate the system’s trial balance and pull the codes. 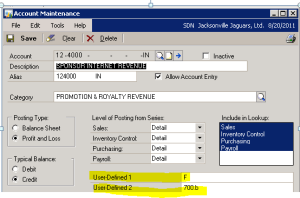 I started with the detailed schedules. First, I spent some time developing a shell format, and since we were under a time crunch and the process to create the simple schedules was fairly easy, I trained two of their staff members to finish building those reports. Then I focused my attention on the rolled-up schedules. Yes, these schedules were a little more difficult because I could not simply pull a schedule as a line in the rolled-up schedule. Well, at least not yet. Maybe that functionality is there in some form, but new product, new learning curve.

The rolled-up schedules required some pieces of certain schedules, primarily ticketing and sponsorship revenues, to be rolled up in different ways. Since I could use any (or all) of the user-defined fields to create additional dimensions for each account, I was able to concentrate on the various line items. Yes, I did have to do some difficult work reconciling of the accounts to the trial balance, but now it is a reusable product. As new accounts are added, they can be coded and reports can be run during the year to balance the P&L and Balance Sheet.

They also do a working trial balance by tax code to use for the tax return. So why not use the third user-defined field for that, too. I ran a GL update integration on this new dimension and now they can run a Working Trial Balance in Management Reporter for tax codes, as well. 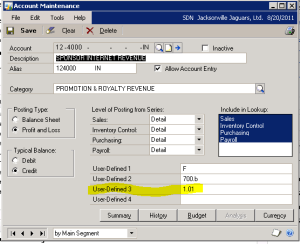 It was a down-to-the-wire day, but we made the NFL’s deadline (which made everyone happy), and along the way, discovered a much more user-friendly and time-saving way of building reports. If you haven’t worked with the new Management Reporter, I strongly recommend you give it a shot. It has some great new features that might help you find long-term, simple solutions to some of those frustrating reports. It worked for the Jaguars!

Graduated from the University of Wisconsin earning a Bachelor of Arts degree in Accounting. I have been with SDN since 1989 . My previous work experience includes five years as a controller and prior experience in a large corporation as a financial analyst. As a computer consultant, I am involved in all aspects of serving the clients computer and information analysis needs. My experience in consulting extends over twenty years with a wide variety of commercial and non-profit organizations. I work with clients in wholesale distribution, construction, manufacturing, health care, and various financial and service organizations. I work directly with management to ensure their reporting requirements are met. As an implementer of Microsoft Great Plains and CRM software, I have received certification on SQL Great Plains implementation and installation, Frx Forecaster , Scribe Software, Salespad, Key2Act Job Cost and Service Management and Certified for Sage Intacct the AICPA recommended product. As a Certified Public Accountant, I am a member of the American Institute of Certified Public Accountants and of the Jacksonville Chapter of the Florida Institute of Certified Public Accountants.
View all posts by sdnprs →
This entry was posted in Management Reporter and tagged Dynamics GP, GP 2010, Management Reporter. Bookmark the permalink.